Posted on November 26, 2012 by Michelle Paratore

On Wednesday, November 14th, I had the pleasure of attending Local Food Lab’s Fall 2012 Demo Night in Palo Alto. Founder Krysia Zajonc summarized Local Food lab concisely in her introduction of the event, explaining that Local Food Lab is an accelerator program for startups which “use business as a means of creating a food system that is more healthy, just, and sustainable.”

Overall, I was impressed by the up-leveling of the entire event, compared with Local Food Lab’s inaugural demo night in July, which I also attended. The atmosphere was more formal and the presenters more polished. Besides kicking off the presenters, Krysia shared with the audience some of the exciting expansion ideas Local Food Lab is pursuing: a program in New York, an investment vehicle for mentors to have an equity stake the next cohort, more structured engagement with the alumni community, and one-off topical courses for food entrepreneurs. I love how broadly Krysia is thinking about the role Local Food Lab can play in the food startup world and I’m excited to witness the organization develop. 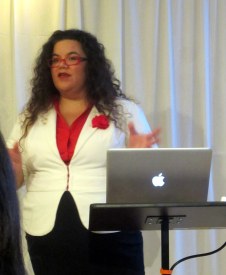 For me, the highlight of the night was Anea Botton, with Valley Girl Foodstuffs. Anea was an effective presenter with an inspiring story. Seeking to combat the dual challenges of 1) Latino teenage gang membership in Sonoma County and 2) food waste, Anea built a business which hires at-risk teen girls to produce jams, dried and pickled fruits and veggies, and other foodstuffs. Three of her employees, Ester, Julie, and Maria, were present and introduced themselves and helped with sampling of the products (which were tasty; I bought a lemon jelly as a gift for my mother-in-law for hosting Thanksgiving).

To address her second mission, Anea sources “less-than-perfect produce” which is not suitable for sale (e.g., day-old bananas from Whole Foods or irregularly shaped fruits which don’t fit markets’ supplier criteria). This strategy aligns with her business goals by giving her a cost advantage while also allowing her to combat food waste.

Most of all, I loved Anea’s attitude about her business. When asked about competitors she replied frankly, “we’re better than them because they don’t have our story,” but she also stressed that the products should stand on their own even without the story. She’s “vehemently against being a non-profit” as she wants to teach her employees to build a business and make money, not to take money. An awesome example of social enterprise.

My other favorites were:

And a quick bit about the other presenters below. Lots of marketplaces and lots of focus on the unmet wants and needs of restless millenials.

Thanks Krysia and the rest of the Local Food Lab team for putting on another inspiring and exciting event.