What “Big Ideas” In Food Get Funded In Silicon Valley?

Much has been written about the ascent of Silicon Valley (SV) as the go-to global incubator for transformational change.  SV has become the Jerusalem of the techno-optimist religion. In venture capital doctrine, the absolution of humanity’s sins begins with seed financing for the next spate of Big Ideas. And in an America where the federal government no longer functions (quite literally), Silicon Valley has taken on new gravity. It is ground zero for ingenuity as cathartic salvation.

The unsustainability of the modern food system is one of humanity’s biggest problems. So, it’s worth taking a look at which Big Ideas in food the leading SV venture capital firms (VCs) are voting for. Where are VCs placing their bets for the salvation of food? (Note: this piece will focus on venture capital financing, but not crowd-funding, angel financing, or later-stage private equity financing, all of which also play an important role in advancing Big Ideas in food.) SV’s rising focus on food has already received attention from the mainstream press.

Before diving in, it’s important to bear in mind a few truths about the VC business model. To have a chance of being funded by a VC, a company must “walk and talk” like a high-growth technology firm. VCs look for: a) billion-dollar marketplaces; b) game-changing innovations; c) short innovation cycles that can quickly lead to high-margin revenue; and d) a promising path to “liquidity” (meaning the sale of the VC firm’s equity shares in the company). One problem cited by food entrepreneurs is that food businesses often don’t fit this profile. So as you peruse the ideas below, it’s also important to consider what’s not being financed. But, more on that later.

VCs love agriculture input innovations. Why? Inputs undergird all of food production, and thus represent massive marketplaces. Plus, VCs understand the imminent scarcity of inputs such as water and petroleum-derived fertilizer. If technology can reduce or supplant the need for threatened resources, it can probably be monetized. (However, because such technologies often hinge on bets about unforeseeable commodity price trends and/or government distortion of markets, they bear resemblance to some of the “cleantech” investments that burned VC firms in recent years.) 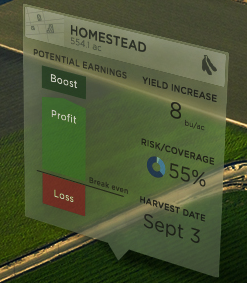 A good place to start is with the recent sale of The Climate Corporation (CC) to Monsanto for over $1 billion. Having liquidated for about ten times the $109 million in venture funding the company has received since 2007, CC is rightly hailed as a successful venture investment, and was backed by big-name firms such as Founders Fund, Khosla Ventures, Google Ventures, NEA, Index Ventures and Atomico. CC is a “Big Data” company that processes historical and real-time weather data with predictive algorithms, and then intelligently prices crop insurance and weather informatics for farmers. CC produces something that tech-oriented VCs can understand, and they’ve cracked into the multi-billion dollar insurance and business intelligence marketplaces. While we may not think about risk management and production intelligence as agriculture inputs, farmers certainly do! CC is an important case study because it shows VCs that they can make money playing in agriculture.

Another interesting information-seller is Solum, which produces soil sensors and an accompanying analytical platform aimed at reducing fertilizer inputs. The company provides farmers with detailed knowledge on the health of their soil to enable precise decisions on how much additional application is needed to maximize crop yields.

VCs have also focused on companies trying to reduce water use. The Roda Group financed mOasis, a company developing a polymer gel that retains soil moisture and reduces watering intensity in arid climates. Both Banyan Water and PureSense offer technology platforms to economize water application on irrigated landscapes. And Khosla Ventures backed NanoH2O, a membrane technology company that lowers the cost of desalination (and brings farmers one step closer to using abundant salty water for their fields).

Seeds are an additional big focus of VC firms. Kleiner Perkins has two non-GMO seed companies in its portfolio: Kaiima and VoloAgri. Both are trying to coax better productivity out of crop lines without directly altering genetics, a la Monsanto.

Note that what all these companies are really selling are data-derived intelligence or intellectual property that could shift entire marketplaces. They are high-risk, but potentially high-return, with global applicability.

Another concept that VCs love is substitutes for conventionally produced animal protein. If you know anything about how resource-intensive it is to raise a cow, you realize it’s probably possible to produce protein far more efficiently. Furthermore, the market for proteins is large and growing as more middle-class consumers come online worldwide.

The animal protein alternatives market is currently dominated by next-generation plant-protein synthetics that closely mimic real meat. The most “buzzy” among them is Beyond Meat, which leads a class of startups investing heavily in food science and processing technique to bring the flavor, texture, and visceral eating experience of their substitutes as near as possible to “the real thing.” The promise for VCs is that these companies will make delicious products with a much lower production cost, thereby carving out a large fraction of the global market by virtue of a favorable price point. Also in this vein is Hampton Creek, an egg substitute with exceptionally promising early market traction, and Lyrical Foods, which is going after cheese.

Further down the pike are companies attempting to grow real animal cell cultures (and ultimately complex animal tissue compounds) in a lab. Rather than originating from a cow in a field, your hamburger would come from “in vitro cultivation” in an industrial incubator. Again, the investment promise of companies such as Modern Meadow is that they will someday streamline production and drop costs – although today, a single “cultured” burger costs $325,000.

(Keep an eye on one more animal protein substitute: farmed insects. While I am not aware of any insect companies currently being financed by institutional VCs, they are thriving on crowd-funding sites such as Kickstarter.com.)

Another well-attended class of ventures is those that are automating processes in the semi-structured environment of food production. For example, Blue River Technology is using computer vision technology to automate in-field weeding and plant selection processes, which have historically relied on manual labor or excessive application of chemicals. Primary backer Khosla Ventures envisions a future where autonomous robotic vehicles diligently roam every agriculture plot around the world. A similar company is Rowbot, which is focused on fertilizer application.

And not far off will be a series of investments in flying drone vehicles used in food production. I don’t know what these will look like, but some have ventured a guess.

Information is of paramount importance in distribution. Since supply chain traceability is of interest for food safety, cost control, and consumer education purposes, VCs have bolstered technology company HarvestMark, which can help track fresh food items down to the package level.

Further along the supply chain is the intersection of food and consumer purchases. Because “consumer Internet” (the intersection of internet technology and the traditional consumption of goods and services, the latter of which composes over 70% of U.S. GDP) has been such a massive area of investment for VCs, the ecosystem of ventures that allow people to seek out, buy, and consume food is extremely robust. Instead of trying to catalogue notable investments in this space, I will refer readers to Brita Rosenheim’s exhaustive map of “Food Tech and Media” companies. For ongoing coverage, Food and Tech Connect monitors this space very well.

What’s Being Left Out?

Anything that is regionally oriented, serves a small market, or fails to provide an “exit opportunity” for VC investors is unlikely to be funded. The reason such investments are left out is because the business of venture capital is to make money, and do so relatively quickly. VCs raise investment funds from limited partners (smaller investors), and promise to “close” a pool of funds and deliver returns within five to seven years. What that means is that even a company that receives investment early in the five-to-seven year life of a fund doesn’t have a tremendously long time to grow and go public, be bought by a competitor, sell to a private equity firm, or otherwise recapitalize to “liquidate” equity shares. If the “exit opportunity” never manifests, the VCs can’t make money, and they won’t make the investment in the first place.

Contrast the five-to-seven year exit timeline with the life cycle of most agriculture and food businesses. Pistachio trees take seven years to mature after planting. Converting land from conventional to certified organic takes at least two years (and probably closer to four in practice). Building sales and distribution in a physical sales network takes much longer than in an e-commerce network. VCs simply aren’t willing to wait for many food businesses to generate a competitive return on their investments.

And, even if VCs waited, a competitive return may never appear. Most parts of the food value chain generate modest profit margins. Contrast the 15% operating margin of Kraft Foods (a mature and profitable food company) to the 34% operating margin of Microsoft (a mature and profitable software company). For a VC chasing “superior” returns, the profit profile of a business matters a lot.

So what “progressive food” business models are unlikely to be courted by VCs? Big Ideas that are a bit ahead of their time (such as vertical farming); “low-tech” agriculture production technologies; local foodshed farming operations; regional food processors or distributors; artisanal “mom and pop” food manufacturers; most restaurant chains; retailers targeting “food deserts”; niche cooking or nutrition education platforms; and most publications or blogs. VC is not interested in Slow Food or Slow Money. And it’s important to recognize that many of the changes needed in the food system simply don’t fit in the “techno-optimist” paradigm. For those changes, alternative investment channels are springing up, but may never develop at all. Future posts will address complementary avenues of investment in other parts of the food system.

In the meantime, cutting-edge food start-up incubators such as Local Food Lab and Accel Foods, and investment enablers such as CircleUp, are trying to close the broad gap between new food businesses and institutional VC financing. As more Big Ideas (and laudable Small and Medium Ideas) in food continue to emerge, stay tuned to the evolving infrastructure of support for food companies.

5 Responses to What “Big Ideas” In Food Get Funded In Silicon Valley?